I talk often about “Money Freedom”, which is the point at which you are free from worrying about money – it no longer stresses you out and you have a handle on how to manage it. It’s where money supports you.

This is TOTALLY do-able!

But what if your goal is even more ambitious than that? What if you want to retire earlier than in your 60s for example?

There are many people who would love to be able to leave work earlier than traditional “retirement age”, often not to “do nothing”, but to gain the freedom to choose what they want to do in life. This is certainly my goal.

This is otherwise known as Financial Independence.

It’s such a hot topic of discussion, that the internet is filled with ways to achieve this ambitious goal. But I will warn you now – it doesn’t come without some degree of sacrifice and it will test your money mindset to the limit…repeatedly.

The biggest champions of the early retirement lifestyle are those in the FIRE community (financial independence, retire early).

There are multiple subsections of this community too:

“Fat” FIRE is not needing to sacrifice the ability to spend money in retirement, meaning a larger retirement pot is needed.

“Lean” fire is minimising your expenses to live a minimalist lifestyle so a smaller amount of retirement savings are required – think people travelling the world in campervans.

“Barista” FIRE is not quite having enough to retire, but enough to work in a job that pays less, reducing stress and worries about working, or your partner still works and you’re fully retired.

“Coast” FIRE is having built up enough money really early on, you no longer need to invest any more money.

Of course, it can definitely be argued that FIRE is for the privileged few who can afford to put a lot aside for investing, or can reduce their expenses to be able to retire early. If you’re on a low income, or have children, this is a much harder position to do this in, but not impossible if you really want it.

The bottom line is, financial independence is where you have enough income from investments  and other ventures to support your lifestyle and bills for the rest of your life without you needing to work if choose not to.

When people reach retirement, this is a kind of financial independence. Their pension fund is paying the bills and the person no longer needs to work again; assuming the pension stretches to cover all outgoing expenses of course.

At least, that’s what it used to be with old-style pensions.

It also totally depends on how you contributed to a pension in your working years. Women sadly are still lagging behind when it comes to pensions, having on average 39% less in their pots at retirement than men (and it varies across the UK) and much of this is due to the wage gap, taking time out to have babies, and returning to work part-time after having them.

The good news is, it doesn’t have to be this way if you identify the problem and DO SOMETHING ABOUT IT.

How To Reach Financial Independence/Freedom

There are numerous routes to achieve financial freedom and this comes in the form of ASSETS.

Assets are things that will put money into your pocket in place of an income.

Financial independence is achieved when your ASSETS are at a big enough size so that your bills and needs are met WITHOUT you needing to work.

So where do you start?

The most obvious is to put money into your work-place pension or self-invested personal pension (SIPP). But if you want to retire before the age at which you can access this money (age 55+ in the UK), then you will need to add in other things.

Perhaps you want to invest in property or stocks and shares? Maybe instead you’ll want to invest in vending machines, storage units or parking spaces. You could start speculating in bitcoin, but there are plenty of things you can do before this that don’t involve this level of risk, unless you’re an enthusiast and know what you’re doing.

With all things, you need to learn what to do, and how not to get caught up in the hype that it can sometimes generate (this is when people get burned).

Your job is to pick a path, learn as much as you can, and follow it until successful! – Dr Nikki

If you are serious about achieving financial freedom, then of course you’ll need money to do it. If you’re in a precarious financial position, and you have debt to pay off with high interest rates, aim to this first. Trim your expenses and plug the holes in your spending so that when you bring more money in, it doesn’t disappear down a black hole of bills. You absolutely can start investing a small amount of money on the side while you do this, providing you are able to meet all of your commitments.

Next, if you need to bring in more money, you could start a side-hustle to help build up your retirement funds. People in my community have started businesses as virtual assistants, coaches, affiliate marketers, photographers and more to bring in an additional income to fuel their dreams.

Beware the shiny-object syndrome though. You could do “all the things”, but it’s best to pick a course, master it, and then move on to the next thing so that you can build a really strong foundation for the future.

The key is then to make sure that extra money you are making is being funneled into an asset that will make you money. This is where property and stocks & shares come in. It’s the assets that build the freedom, not the side-hustle or your work/business that does. The cash flow quadrant explains this really well.

The path to freedom

So financial independence is not impossible. There are plenty of people who have achieved it, and the age at which people do seems to be getting younger and younger!

It is a lifestyle commitment choice though, and it certainly isn’t easy if you’re struggling as it is to achieve even a normal retirement pot! But I truely believe that if you want it, then it can be yours too.

Just remember the mantra: spend less than you bring in, and invest the difference.

I hope this post gave you some inspiration! You might not be interested in achieving this goal, but the same principles apply even with reaching a normal-age retirement (if that is even a thing anymore!), so it will all help.

I’d love to know your thoughts – do you dream of early retirement?

Enjoyed that? Why not try this, or pin it for later!

[…] means to cover the costs of buying a home, don’t stretch yourself, because it could damage your financial situation […]

Dr Nikki, aka The Female Money Doctor, is the ONLY doctor to be featured in the top 25 feedspot list of Personal Finance Blogs in the UK.

With over 10 years of experience as an NHS doctor and women’s health specialist, she sees the impact poor money management skills have on the mental health of her patients and colleagues, and is on a mission to change that.

She believes that we cannot be truly healthy while a money nightmare is going on in the background.

She has trained as a money coach and now helps women from all over the world to improve their mental health and well-being through getting organised with their finances and building wealth for the future they truly deserve.

Wealthy women will change the world, and she is playing her unique part in making it happen through her award winning blog, The Female Money Doctor. com

When she’s not making money magic she’s travelling around the world, enjoying wine and hanging out with her gorgeous Husband Tom. 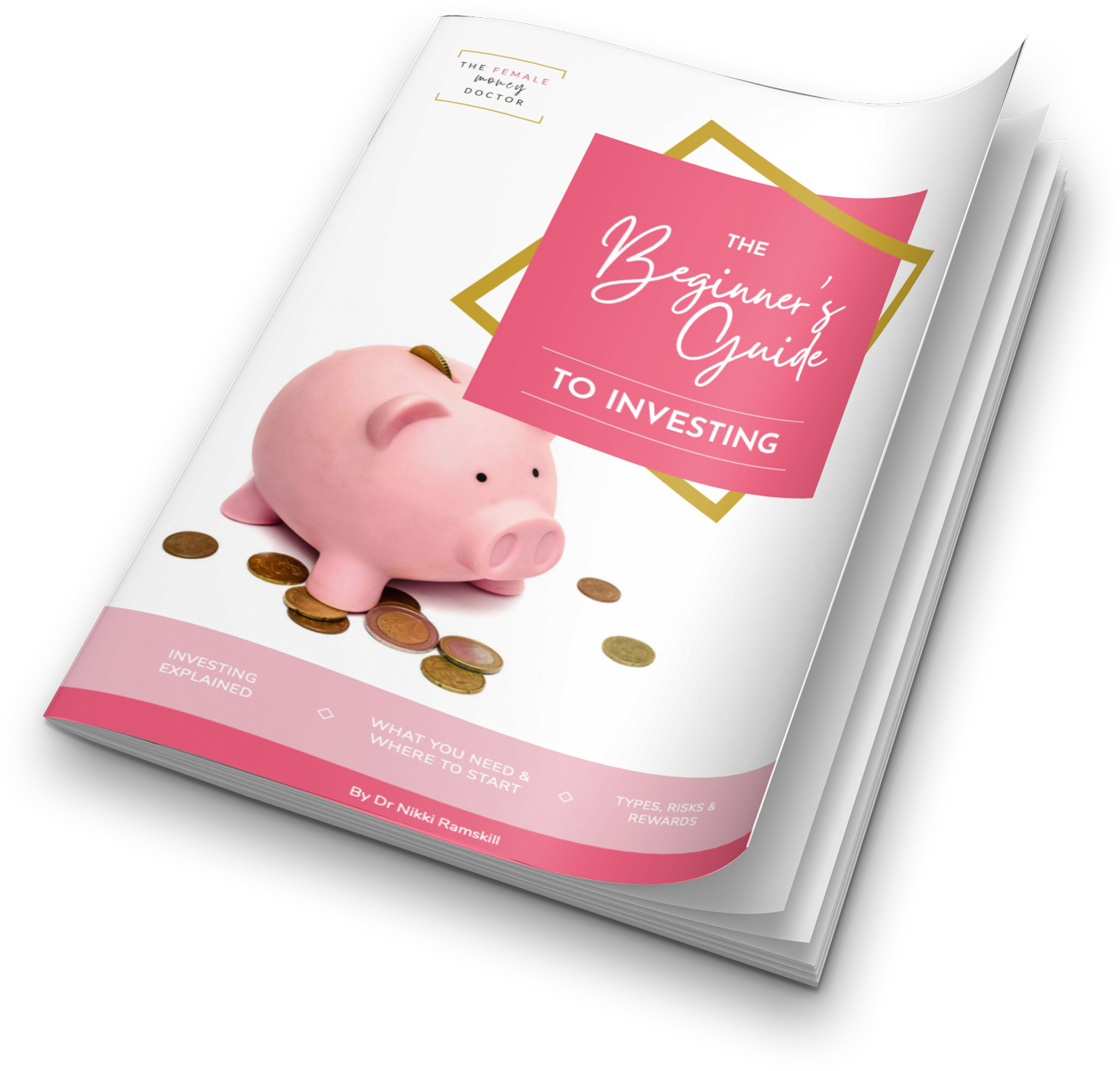